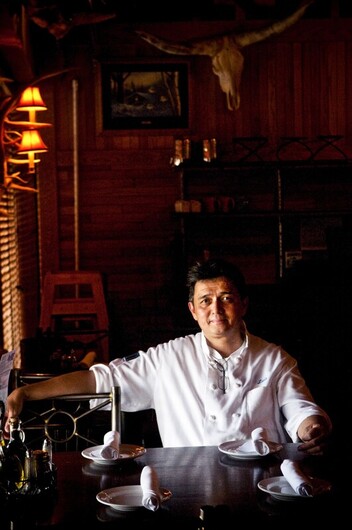 I was born in 1959 in the former Portuguese colony of Macao. It is a ten ½-square-mile area across the Pearl River Delta from Hong Kong.

My Dad's father moved his family from Portugal in 1902 when my grandfather was appointed counsel-general.

My late mother, Juliana Isabel Dacosta, was Macanese – half Chinese and half Portuguese. She was born in Shanghai.

She was secretary to Stanley Ho, who is still the power behind gaming in Macao. My father, who is 87, is an electrical engineer who also was the colony's treasurer for many years.

My mother was a great cook who embraced the Macanese style of cooking – part Chinese and part European. I learned how you could combine olive oil and soy sauce and make it work.

On most weekends, the families of two of her friends from Shanghai came to our house. There would be other kids my age. We either would sit down to a big potluck dinner, or the women would cook, and then we would eat.

We could fit 22 adults around our dinner table.

I sometimes would be called on to do prep work for these meals. It was a great environment to grow up, both culturally and because of the great family atmosphere, or shall I say extended family.

My mother was determined to send me to the United States for my culinary training. I probably would not be coming back to Macau. Macanese people's opportunities were already limited and the situation only would worsen as the Portuguese influence faded and more Chinese moved in.

But before leaving, I went to work as an apprentice in the Hilton hotel's kitchen. I stuck out because all the cooks were Chinese. They knew I got the job because of my family, but I didn't get any special favors. I spent seven months washing dishes. I wanted to quit after two weeks, but my Dad wouldn't hear of it.

The hotel had nine restaurants serving all kinds of cuisine. One was French, and it turned out to be terrific exposure. The time came when they put me in charge of making up to 30 different soups a day.

At the Hilton, there was no systematic teaching. You had your tasks, but you had to keep one eye on what everyone else was doing if you were going to learn how to do things.

After I turned 21, my parents decided to send me to America to enroll in the hospitality program at Michigan State University in East Lansing. I enjoyed it, eventually becoming a teaching assistant to chef/instructor Robert Nelson.

We also clashed at times because, ironically, I was the one who thought everything should be made from scratch. That is what we did at the Hilton, where the chefs in charge were European. Like them, Chef Nelson was classically trained but knew the realities of the commercial kitchen.

I didn't have a work visa to take jobs off-campus, so I was limited to cooking for minimum wage at the University Club. That was all right, though; I was free to blend my Macau recipes with the recipes I was given here.

I got my degree and went to work in Chicago for a restaurant group owned by Taiwanese immigrants. There were seven restaurants in the group. All were Chinese except one, which was pan-Asian. I was a food and beverage controller. Eventually, I got to work in the kitchen of the fusion place.

While working in the fusion restaurant, we brought in American influences to Cajun and Creole recipes. I was allowed to experiment, and it was a lot of fun.

Chicago was becoming a great restaurant city, and the great Jean Banchet was doing beautiful things at Le Francais out in Wheeling. He made a fillet into a work of art.

I stayed in Chicago for three years.

I grew to like Michigan while I was at Michigan State and had friends there. So, when an offer came to be the chef at a new restaurant in Fenton, Michigan Bean Co., I accepted.

I later worked at Bosley's in Flushing before opening my first restaurant, with my wife, Theresa, in Linden, a small town about 20 miles south of Flint. That was in 1990. It took us about two years to establish ourselves at Broadstreet. I had gained enough confidence to start calling on all the different elements of cooking I had learned.

I put a dish on the menu called Asian bouillabaisse. It was served with Chinese noodles and lemongrass in a ginger-clam broth. Diners raved about it and most of the other fusion dishes I made, so I knew I was on the right track.

Theresa and I closed Broadstreet in 2000. We were successful, but the building was old and crumbling, and we could not justify borrowing the large sum required to make it adequate for the long term.

We relocated to Flushing and operated there until 2004. I became involved in several other enterprises before becoming the Blue Collar Restaurant Group's corporate chef in 2007.

By 2010, I was executive chef/general manager of Redwood Lodge near Flint and 501 Bar & Grill in downtown Flint. The menu at 501 consists of small plates, tapas if you like. This restaurant is part of a renaissance in downtown Flint that has been personally gratifying.

Today, I am the Executive Chef and Managing Partner of Redwood Steakhouse, formally known as Redwood Lodge. While we have had many changes in the last year due to COVID, we have also had some great ideas. The Macanese Grill was initially a cookbook idea that I worked on with my great friend Ron Kruger. Although we never finished that book, I decided a restaurant based on those recipes would bring new and old clientele to the table. The Macanese Grill is bringing new recipes based on my fusion cooking and some old favorites from Broadstreet. Macanese Grill's goal is to bring home excellent fusion food for dinner with minimal prep work required.